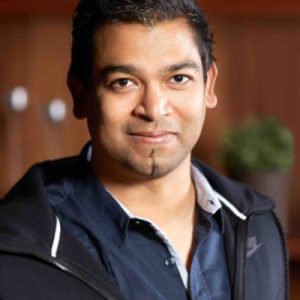 Richard first met entrepreneur and founder of AMPLIFY agency, Ronsley Vaz, during Glen Carlson’s Key Person of Influence program. Ronsley has been at the forefront of the podcast movement in Australia and has inspired Richard in the development of the Arete podcast. Ronsley is a dynamic entrepreneur, someone who is  good humoured, optimistic, energetic, focused and always ready for a challenge. He is the co-founder of social enterprise Eat for Two, and host of podcasts Bond Appetit and Should I Start a Podcast.

Ronsley has had an extremely interesting and diverse career. He earned a Bachelor of Computer Science and Engineering at Karnatak University in India, before commencing a career in the IT industry. Later he returned to university to complete a Masters of Business at Queensland University of Technology. Being a passionate entrepreneur, he moved into the food industry and opened his own restaurant for a short time before venturing into other areas of food and lifestyle. After completing the KPI program, he began his own podcast which quickly became highly successful.

He has now founded AMPLIFY, an agency which supports organisations using podcasting to broadcast messages to the community. AMPLIFY  is a leading audio marketing agency in Australia which has enjoyed rapid growth since it was established in 2016. The agency now has 11 full-time employees across six time zones. Ronsley is also an author, having just finished writing a book and he has also recently hosted his second annual podcast conference – We Are Podcast.

Ronsely’s story is one of humble beginnings. Born in Goa, Ronsley recalls early childhood memories of his family sleeping on a mattress on the floor during a time when his father worked washing dishes in a restaurant. Ronsley inherited his entrepreneurial spirit from his father – the original entrepreneur –  who eventually went on to establish a construction business, which he hoped Ronsley would assume responsibility of. But life had other plans for Ronsley. He was lured to Australia after being told by friend Griffith University was located on the beach and so he  relocated in 2003 to complete a masters of software engineering.

In 2016, Ronsely was a Finalist in the Business News Australia Young Entrepreneur of the Year Awards. AMPLIFY has also been named as one of the Top 100 Coolest Companies in Australia by Anthill Magazine.

With today marking the start of the 2018 Commonwealth Games, we find ourselves reflecting on the lessons our competing athletes can teach us about high performing teams in the workplace. Striving for excellence both individually and together as a team, they demonstrate the amazing results that can be achieved when passionate, committed, and fully engaged […]
END_OF_DOCUMENT_TOKEN_TO_BE_REPLACED
Blogs

When changing your career path or considering roles you have been headhunted for, it can be easy to play it safe and say no to opportunities that take you interstate or to more regional areas. However, in a recent Forbes article it was said, “One of the biggest job-search mistakes you can make is to […]
END_OF_DOCUMENT_TOKEN_TO_BE_REPLACED
I would consider Richard to be Australia’s best advisor when it comes to accelerating your executive and board career, and give him my highest recommendation. I have witnessed first hand the results of Richard’s industry leading approach.