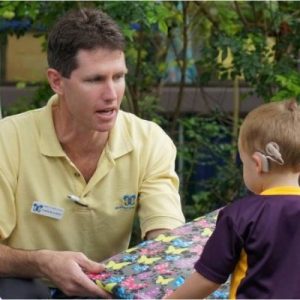 Noble man, Chris McCarthy – CEO of Hear and Say – talks: The non-for-profit space, awakening the senses, delivering on the greater good and living a blessed life.

Chris McCarthy is the CEO of Hear and Say, a non-for-profit organisation and one of the leading paediatric auditory-verbal and cochlear implant centres in the world. The centre was established 25 years ago and across six centres in Queensland offers services for children who are deaf or suffer some form of hearing loss. Chris has had an interesting career working over a number of different sectors, before joining Hear and Say as General Manager in 2007. He assumed the role of CEO  in 2012. Chris previously held roles with Suncorp Metway and SMS Management and Technology.

Born in Rockhampton, Queensland, one of two sons, Chris spent most of his childhood living in regional Australia – his father’s work as a school principal meant his family relocated regularly. From Dalby to Goondiwindi, Mt Isa and Townsville to Ballandean, throughout his childhood Chris adapted and lived in many different places, an experience which profoundly shaped him. During his teenage years, his family finally settled in Brisbane where he finished his secondary education. Chris is a self-confessed “bush kid,” and says while he has spent most of his adult life in the city “his roots are in the bush”. Upon finishing school, he began a degree at university but after some time trying to “find his feet,” decided to leave university and ultimately joined the Australian army, graduating from the Royal Military College, Duntroon, in 1993. Chris attributes his leadership ability to many of the skills he acquired in the military. He says the leadership skills he learnt in the military were “second-to-none,” and that gave him scaffolding to build upon, teaching him the basic skills he needed to transition out of the military and into a civilian career space successfully.

Chris lives in Brisbane with his wife and three children.

With today marking the start of the 2018 Commonwealth Games, we find ourselves reflecting on the lessons our competing athletes can teach us about high performing teams in the workplace. Striving for excellence both individually and together as a team, they demonstrate the amazing results that can be achieved when passionate, committed, and fully engaged […]
END_OF_DOCUMENT_TOKEN_TO_BE_REPLACED
Blogs

When changing your career path or considering roles you have been headhunted for, it can be easy to play it safe and say no to opportunities that take you interstate or to more regional areas. However, in a recent Forbes article it was said, “One of the biggest job-search mistakes you can make is to […]
END_OF_DOCUMENT_TOKEN_TO_BE_REPLACED
I would consider Richard to be Australia’s best advisor when it comes to accelerating your executive and board career, and give him my highest recommendation. I have witnessed first hand the results of Richard’s industry leading approach.